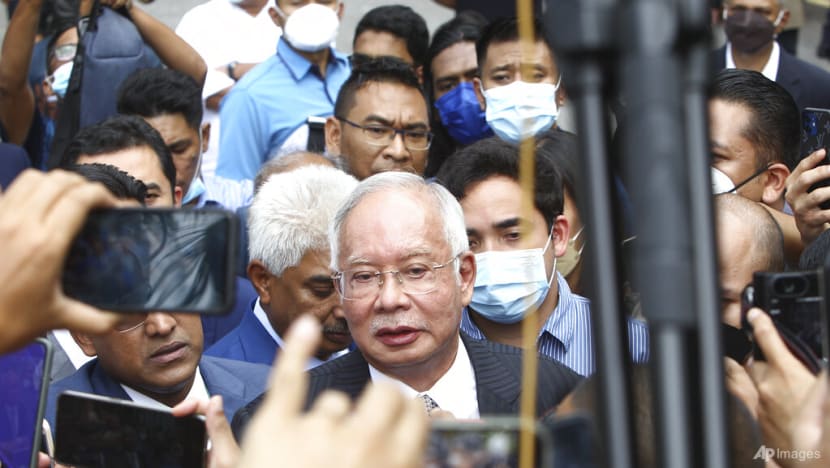 Malaysia’s former prime minister Najib Razak will serve his 12-year prison sentence after the Federal Court on Tuesday (/Aug 23) upheld the guilty verdict against him in the SRC International case.
Post Views: 113

Putrajaya (24/08 – 22.22) Malaysia’s former prime minister Najib Razak will serve his 12-year prison sentence after the Federal Court on Tuesday (/Aug 23) upheld the guilty verdict against him in the SRC International case.

The court dismissed Najib’s appeal to overturn the jail term and RM210 million (US$46.8 million) fine over seven charges in the case involving funds from the former unit of 1Malaysia Development Bhd.

The panel said in the grounds of judgment for the final appeal hearing: “On the totality of the evidence, we find the conviction of the appellant on all seven charges safe. We also find that the sentence imposed is not manifestly excessive.

“These appeals are therefore unanimously dismissed and the conviction and sentence are affirmed.”

Najib’s daughter-in-law told the AFP news agency that he was sent to prison shortly after the court upheld his sentence.

“We were told he has been taken to Kajang Prison, south of the capital Kuala Lumpur,” Ms Nur Sharmila Shaheen said to AFP.

Earlier in the day, Najib failed in his bid to recuse Chief Justice Tengku Maimun Tuan Mat from presiding over his final appeal.

His lead counsel Hisyam Teh Poh Teik informed the Federal Court that the application to recuse the chief justice was filed the night before.

Citing a social media post by the Chief Justice’s husband in 2018, Mr Teh said it is clear that he had negative sentiments towards Najib’s leadership. He argued that this was grounds for the Chief Justice to recuse herself from the proceedings.

When reading the bench’s decision to dismiss the application, the Chief Justice said there was no nexus between her husband’s 2018 Facebook post and that of Najib’s appeal.

“To recuse a judge is a real danger of bias,” she said on Tuesday.

The prosecution had wrapped up their submissions on Aug 19, with the prosecutor telling the court that the combined roles played by Najib enabled him to execute his plan of benefitting from SRC International funds.

The apex court had last week denied Mr Teh’s request to discharge himself from representing the former prime minister in his final appeal.

Mr Teh did not make a submission during the Tuesday hearing.

The charges against Najib, who served as prime minister from 2009 to 2018, involved the transfer of RM42 million from SRC International, a former subsidiary of 1Malaysia Development Berhad (1MDB) into his personal bank accounts in 2014 and 2015.

He was found guilty on three counts of criminal breach of trust, three counts of money laundering and one count of abuse of power by the High Court in July 2020, and was sentenced to 12 years in jail and fined RM210 million.

The conviction was upheld by the Court of Appeal on Dec 8, 2021. Najib later filed a petition of appeal to the Federal Court on Apr 25 this year.

The Federal Court had initially set aside nine days – Aug 15 to Aug 19 and Aug 23 to Aug 26 – for his appeal. This is Najib’s final bid to overturn the guilty conviction.

The trial proper however only started on Aug 18, after Najib’s lawyers had filed several applications.

On Aug 15, Najib sought to adduce new evidence in his appeal, but the five-man bench unanimously rejected the application a day later.

The Federal Court also dismissed a request by Najib to adjourn the final appeal hearing.

On Sunday, Najib took an Islamic oath at a mosque in Kuala Lumpur, where he swore on his innocence.

Before the verdict was delivered, Najib addressed the apex court, reiterating that his lawyers needed more time to prepare for the appeal. He also claimed that he was not given a fair trial and that his case was rushed.

He asked the judge for a two-month postponement of the appeal. “Let me have my day in court to present the fullest arguments of my case. My life and liberty depend on it,” he said.

A message that Najib left for his family was posted on his Facebook account on Tuesday night. It said that from 1976, Najib was active in politics and public service full time.

It added that his “years have gone by dedicated to people, public service, politics” and that it was “a sacrifice I chose and I made”.