As he surrounded himself with a new team of loyal advisers and cemented his rule for another five years, Xi appeared unfazed by the storm of diplomatic, health and economic crises that were brewing. And then, almost overnight, everything changed.

By the end of the year, Xi had abruptly abolished zero-COVID and prepared to reopen China’s borders after three years of isolation. At the same time, his government wound back restrictions on borrowing by property developers and heavy-handed regulations that had wiped billions of dollars off the market value of the country’s internet giants.

Xi’s abrupt about-face also made its way to the international stage. After three years of diplomatic isolation, Xi was on a charm offensive at the G20 summit in Bali where he met Anthony Albanese, Joe Biden and other world leaders. Australia was suddenly back in his good books and authorities moved to lift a two-year ban on Australian coal.

The policy backflips by the Communist Party, which rarely admits it makes mistakes, have baffled even the most astute China watchers, not to mention hundreds of millions of people in China who have now been infected with a virus their government told them they would protect them from.

Although it is impossible to accurately document what is driving Xi’s decision-making, the most obvious motivation is salvaging the $24 trillion economy and heading off any social unrest that could build up because of financial hardship.

“The underlining reason is the economy. The economic situation in China is really very bad and Xi Jinping wants to get this over with,” says Willy Lam, adjunct professor at the Chinese University of Hong Kong’s Centre for China Studies.

“This three-year [COIVD-zero] policy has massively reduced the authority of the Communist Party. You are now seeing violent clashes between workers who think they are not being paid well and the police. In the past, they would have protested quietly. You are seeing more signs of rebellious action on the part of workers, students and medical interns.”

If Xi’s motivation for giving up on the war against COVID-19 and adopting a more business-friendly tone is the threat of civil unrest, that is something the Chinese government would never admit.

Small protests broke out around China in late November as public frustration with lockdowns and other restrictions peaked. Although many observers link these to the government’s decision a week later to live with the virus, Xi’s other likely incentives were soaring infection rates and the realisation that it was going to be impossible to contain the omicron variant.

“The dam wall had already busted and the virus was already circulating. I don’t believe the protests played a role. The government can quash those in five minutes. They just knew what was coming, so you may as well find an eloquent way to deal with it,” one Australian businessman living in China says.

China is now in the grip of the world’s biggest COVID-19 outbreak to date. The human cost of abolishing COVID zero is difficult to calculate because of the lack of accurate data and the government’s narrow definition of deaths from the virus. Fewer than 40 official COVID-19 deaths have been reported since restrictions were lifted on December 7.

Social media posts and anecdotes on the ground tell a different story. Hospitals and crematoriums are overwhelmed and pharmacies are selling out of painkillers and anti-viral drugs. Most of the dozens of people AFR Weekend has spoken to in China over the past fortnight have been infected and several said they had elderly relatives who had died. Authorities said this week that almost 90 per cent of people in Henan, China’s most populous province, had been infected.

Xi’s New Year speech earlier this month struck a defensive tone at a time when the government is in damage control over the way it has managed the outbreak. But he also talked up the importance of a strong economy, a subject he did not mention the previous year, which was another signal about where his priorities could lie this year.

Focusing on the economy

After a year of crackdowns against big business and mixed regulatory signals, Xi now appears on a trajectory designed to support a post-pandemic economic recovery. That looks like good news for Australia as a construction boom would support ongoing demand for iron ore, while sanctions on some Australian exports are also expected to be quietly eased.

In mid-November, Beijing launched a rescue package designed to save struggling property developers like Evergrande from collapse. A 16-point plan included easing restrictions on bank lending while the central bank pledged billions of dollars in additional lending. Until then, the government had not intervened in the housing crash which was threatening the wider economy.

Policymakers are also flagging stimulus and tax cuts, and this week a top central bank official said a two-year regulatory crackdown that affected the country’s biggest internet companies, including Alibaba Group and Tencent Holdings, would be wound back.

Xi’s desire to restore China to its former economic glory is also driving his switch in foreign policy. As China becomes increasingly isolated on the world stage following years of aggressive “Wolf Warrior” diplomacy and its tacit support for Vladimir Putin’s invasion of Ukraine, Xi now wants to engage with the West. This week China’s most provocative diplomat, former Foreign Ministry spokesman Zhao Lijian, was sidelined to a lower-profile position.

China’s former deputy ambassador to Australia, Wang Xining, who controversially presented Australia with a list of 14 grievances during his time in Canberra, has also left his post for an ambassadorial position in Chad in central Africa.

Australia has been one of the top beneficiaries of this change in diplomatic tone with Foreign Minister Penny Wong welcomed in Beijing last month and early signs that Xi’s government may wind back some sanctions on $20 billion worth of exports implemented when relations hit a low point in 2020.

There is little doubt China’s economic problems at home are driving the foreign policy shift. Beijing wants foreign investment and access to the resources, including Australia’s rare earths, needed to drive its economy.

Experts also say Beijing fears becoming completely isolated as even old allies in Europe got off side and Western allies rallied together with AUKUS, the Quadrilateral Security Dialogue (Quad) and the United States’ Indo-Pacific Economic Framework for Prosperity.

Xi plans to roll out the red carpet this year for a string of visitors to Beijing including US Secretary of State Antony Blinken, French President Emmanuel Macron and Italian Prime Minister Giorgia Meloni.

Economists predict the economic turnaround will come in the second half once the initial waves of infections subside and life returns to normal in a country where high household savings could cushion some of the damage already inflicted. Morgan Stanley this week lifted its GDP forecast for 2023 for China by 0.3 percentage points to 5.7 per cent.

“We believe the market is under-appreciating the far-reaching ramifications of reopening and the possibility that a robust cyclical recovery can occur despite lingering structural headwinds,” Morgan Stanley’s chief China economist Robin Xing wrote this week.

Still, Xi is not out of the woods as China navigates its way through the world’s biggest outbreak since the start of the pandemic and faces the daunting task of rebuilding trust with its own people and the global community.

One darker theory circulating in financial markets is that there may have been a mini internal revolt against Xi in the senior levels of the Party as public frustration with zero-COVID peaked.

Sung does not subscribe to that theory and says there is no sign that Xi’s authority is wobbling,

“I think Xi’s pressure is more about delivering policy performance than political challenge from within the party,” he says. 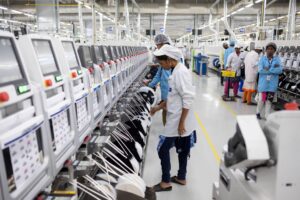