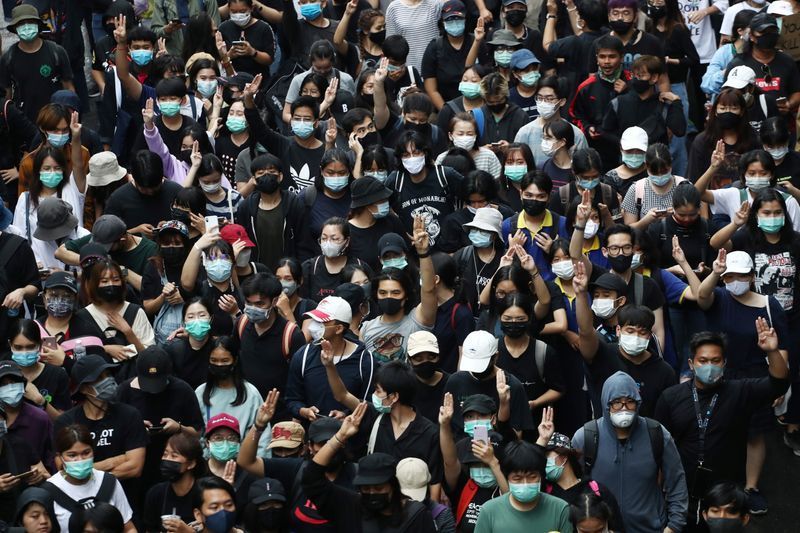 A key protest group last night announced a new campaign focused on a single demand that will have “no leaders, rallies, or compromises.”

Free People, which has called most of the recent mass rallies, announced Restart Thailand on Monday night with the trappings of a reborn republican movement – complete with socialist overtones – declaring it a place for all people as “oppressed workers” to work to create an “equal country.”

“This is a new movement where nothing will be the same. [We’ll] raise awareness of the oppressed working class, no matter if you are students, office workers, non-uniformed staff, farmers or civil servants. We are all oppressed workers,” Free People announced.

It even has a striking new logo with its initials spelled out by a hammer and sickle, which got a mixed reaction for invoking Communism.

Free People did not spell what the sole demand would be; however, its recent tease hints at republican ambitions to remove the monarchy from power.

“What should Thai state do? Remove, reform, repair or re…” it said.

It vowed the movement would be even more decentralized and leaderless.

“This RT Movement will no longer have key leaders, no stages, no guards, no mobile toilets, no negotiations and no compromises.”

Free People is one of about a dozen groups associated with the decentralized protest movement, though its best known publicly for organizing most of the major mass rallies in recent months. It started as the Free Youth group before rebranding as Free People, and leaders include Tattep “Ford” Ruangprapaikitseree, Jutatip “Ua” Sirikan, Panusaya “Rung” Sithijirawattanakul and lawyer Arnon Nampa.

Since August, Free People’s rallies have coalesced around three central demands – the resignation of PM Prayuth Chan-o-cha, a constitutional rewrite and reform of the monarchy.

Overt campaigning for a Thai republic has been a dangerous proposition in the past, with several people arrested two years ago for wearing T-shirts linked to an underground republican movement. But the ground has moved rapidly in recent months beneath once-absolute taboos, with the role of the monarchy now up for debate.

Some complained Restart Thailand’s trappings and iconography were things of the past, particularly the hammer and sickle imagery most associated with the former totalitarian Soviet state.

“This hammer and sickle logo is very well designed, even though farmers these days are using tractors, and factories are using robots,” wrote Sombat Boonngamanong, a longtime, high-profile activist.

Thai studies anthropologist Edoardo Siani wrote that the association with communism was “dangerous” and would be less inclusive of different groups.

“Very disappointed to see this Marxist identity being superimposed onto the movement. First, the association to communism is dangerous. Propaganda in the Cold War served to legitimize state violence against ‘communists,’” he said in reference to the red-baiting of the Cold War era that culminated in the 1976 Thammasat Massacre.

He said recent attempts by top military brass to link the movement to communism would get a boost from Restart Thailand’s rhetoric.