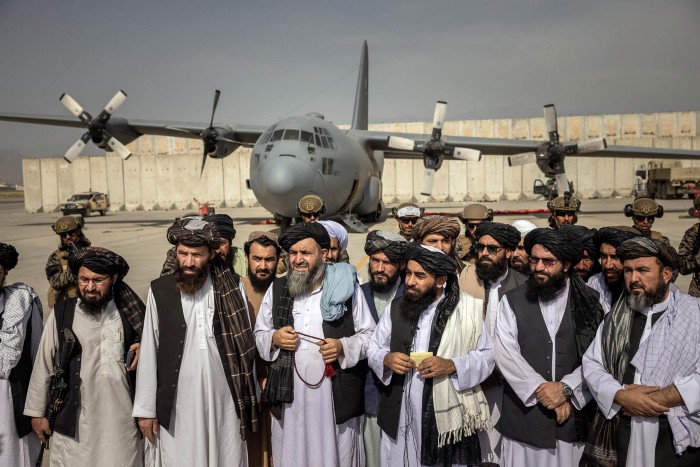 Time turns a page to mark a year since the re-emergence of the Taliban in Afghanistan through the colossal failure of the Biden administration’s botched military withdrawal. The threat that the Taliban now emanates to Asia and the world is not pristine but rather a neo-mandate of its former leadership.
Post Views: 122

Colombo (27/08 – 20.00) Time turns a page to mark a year since the re-emergence of the Taliban in Afghanistan through the colossal failure of the Biden administration’s botched military withdrawal. The threat that the Taliban now emanates to Asia and the world is not pristine but rather a neo-mandate of its former leadership. This is not to say that its leadership is weak or incapacitated as the same leadership is ultimately responsible for kicking the Americans out whilst largely being operational out of Afghan cave systems. It is simply to say that there exists a visible shift in Taliban strategy towards international acceptance and ratification.

During the pre-9/11 days of Taliban control in Afghanistan, the country hosted a profusion of training camps run by al-Qaeda and other terror groups. During the Soviet invasion of Afghanistan in the late 1970s and 80s, thousands of fighters from the Muslim world flocked to Afghanistan to fight the Soviets. Young fighters that formed the Afghan Mujahedeen included Osama Bin Laden from Saudi Arabia and Abu Musab al-Zarqawi from Jordan who would ultimately form al-Qaeda and the Islamic State respectively.

As passenger airliners flew into the majestic towers in daytime New York, Bin Laden became a more influential entity than any other government, leader or organisation in modern history. As the towers fell to dust, America fell to its knees, thus triggering the global War on Terror — an ongoing conflict that has snatched millions of lives and dismantled countless communities across the world.

Twenty years down the line, The US withdrawal from Afghanistan is a major political win for the Taliban cementing their return to power in Central Asia. This return to power is not merely a Taliban comeback but rather the aggravation of the al-Qaeda alliance in the region.

With the Taliban’s phoenix-like rise to power, dozens of terror and non-terror groups across the world sent them their congratulations and praises — including Sri Lanka’s Tamil National Alliance. Naturally, groups like al-Qaeda and Islamic State cells are bolstered in their international politico-religious agendas as Afghanistan has once again become a haven for threat groups. The highly unstable and ever-changing political situation in Afghanistan clearly illustrates how tribes and government groups have often switched sides and backed terror groups to ensure their own survival.

The Taliban had emerged through the Afghan Mujahedeen as a defensive group that assembled to form a bulwark of sorts against Soviet assault on the traditional Pashtun culture. This initial stance by the Taliban has cemented their popularity among the Pashtun people for decades. However, the Taliban’s historic ties, familial relations and shared outlooks with other groups had resulted in a slow infiltration of the Taliban to function as a jihadist group. The Salafi Wahhabi ideologies that emanated from the Gulf had ideologically penetrated the Taliban ranks to shadow its Pashtun roots and embrace fundamentalist and violent Islamist perceptions.

Although twelve months have passed after the rise of the Taliban, the world has not seen the violent consequences of Biden’s failure — yet. A momentary glimpse of the boiling pot was made when it was revealed that Ayman al-Zawahiri had taken refuge in the capital of Taliban-controlled Kabul. Al-Zawahiri remained al-Qaeda’s most consequential leader after Bin Laden was shot in Abbottabad, Pakistan eleven years ago. The very fact that al-Zawahiri was given refuge in a villa belonging to Sirajuddin Haqqani, the deputy leader of Taliban’s Afghanistan, underpins the threat that the Taliban posits to the world at large.

The Taliban in itself may not necessarily be a threat to global security as its neo-mandate appears to focus on national governance and international ratification — however, the group’s emergence to power creates a black hole in Afghanistan that functions as a terror haven for other terror groups to train, bolster and consolidate. Groups like Lashkar-e-Taiba threaten regional security especially in India, while groups like al-Qaeda threaten the status of global security. Both groups operated training camps during the Taliban’s previous phase of power and are likely to run camps under the new Taliban.

The Taliban and al-Qaeda were linked to the killing of Maldivian journalist Ahmed Rilwan Abdulla back in 2014 and have sowed seeds of discord in the country since the 1990s. Terrorist networks in South Asia do not stop at borders and easily transcend them. This is especially true of international global terrorist groups like al-Qaeda and the Islamic State brand of terrorism.

The Taliban/AQ alliance and Islamic State, however, are rivals. Although Salafi Wahhabism has infiltrated the ranks of the Taliban, the top leadership of the Islamic State and al-Qaeda have deep-rooted long-standing disputes. Operational as Islamic State Khurasan Province (IS-KP), its attacks have become frequent in targeting Taliban efforts in a tug-of-war fight for power, dominance and authority in the region and amongst the population. The two groups frequently engage in propaganda campaigns against each other that easily divide and sow discontent.

Two of the deadliest Islamist terror attacks that occurred in South Asian history are tied to the Islamic State. The 2019 Easter Attack killed more than 270 people in Sri Lanka and was the largest IS attack outside of Iraq and Syria and the 2016 Dhaka terror attack killed 22 people. This acts as a clear indication of the propensity for the Islamic State brand to be adopted by local bad actors to gain political advantage and recognition for their terror attacks globally. Earlier this year, Indian authorities arrested two terrorists belonging to the al-Qaeda-affiliated Ansar Ghazwat-ul-Hind in the northern state of Uttar Pradesh. The two men, according to the arresting officers, were planning to conduct deadly attacks in the state capital of Lucknow. In the same month, three were arrested in connection with setting up terror networks in Kolkata. The overall risk of the Taliban and its affiliates inspiring regional conflict is significant and growing.

Many high-ranking officials of the Islamic State cite South Asia as an important region for their activities. Even though they have enjoyed the success of sorts in the form of successful terror attacks, they have not gained a strong foothold there yet. With the largely successful decimation of the IS caliphate in the Middle East, IS has not been able to appoint a charismatic leader, build a strong chain of command in the region or sustain coordinated operations in South Asia. However, after the US killing of al-Qaeda’s al-Zawahiri in Taliban-controlled territory in July 2022, the possibility looms of a temporary truce between al-Qaeda, Taliban and IS working together. If this fusion transpires, the threat to global security will rise significantly.

As the US shifts its foreign policy from the Middle East to the Indo-Pacific region, intense conflict and deep-rooted crises could materialise within South Asia. With the Taliban firmly ensconced in Afghanistan and enjoying political freedom from the lack of pressure the United States previously applied, this possibility is strongly underpinned. Training facilities, recruitment efforts, and offensive staging capabilities could all be protected under this terror ecosystem being redeveloped in Central Asia.

This is of course coupled with the ignominious failure of the Biden-Harris administration in abandoning billions of dollars worth of state-of-the-art equipment — something that now gives the Taliban and its allied terror factions greater access to launch mid- and high-level operations across South Asia. The high-tech equipment has effectively equipped the Taliban to be a force to be reckoned with.

Sri Lanka, at present, is a figurative sitting duck amidst a massive geopolitical powerplay between the US, Russia, China and India while the threat of terrorism looms from the black hole in Central Asia. A unified Islamic State and Taliban/AQ alliance would spell doom for South Asia and other regions of the world. The establishment of intelligence-sharing mechanisms among regional and international agencies will significantly reduce the threat that emanates from Afghanistan. Likewise, strict monitoring of online spaces, especially social media and chat rooms, is paramount to a strong defence capability against an ideologically-charged terrorism threat. Sri Lanka must brace herself for impact.