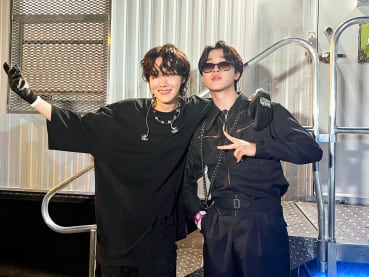 K-pop superstar J-Hope of BTS made history on Sunday (Jul 31) as the closer at Chicago's annual Lollapalooza weekend, becoming the first South Korean act to headline a major US music festival.
Post Views: 151

Seoul (07/08 – 31.25) K-pop superstar J-Hope of BTS made history on Sunday (Jul 31) as the closer at Chicago’s annual Lollapalooza weekend, becoming the first South Korean act to headline a major US music festival.

The day after the show, he went on VLIVE to share his experience. “It’s finally over, everyone. Thank you. I’m choked up because it was a long process. I practiced for around six hours a day,” he shared, adding that he “didn’t want to ruin the BTS name.”

He also gave a shout-out to his fellow band member Jimin, who was there at the performance.

“Him coming all this way to support me was really helpful and gave me strength. When I arrived I didn’t have an appetite, so I didn’t eat. But when Jimin showed up, for the first time I finished a meal. That’s how significant the sense of stability my members and friends give me is.”

During the performance, J-Hope appeared to dramatically pop out of a box as he took the stage in Chicago’s Grant Park, and was greeted by a sea of screaming fans.

The crowd rapped and sang along to songs from his new solo album and to BTS classics such as Dynamite.

J-Hope, who also presented a special message to viewers in Korean, was joined at the end of his set by singer Becky G for a rendition of their collaboration Chicken Noodle Soup.

Meanwhile, Jimin, who also took part in J-Hope’s VLIVE session, added: “Hyung was exhausted. I knew he had a hard time for a month or two, but he didn’t turn on the lights, lived in a dark place, and lost a lot of weight. I thought ‘Wow, it was really difficult,’ but the performance was so cool.”

He added: “All of our members should have come to see it. We have to learn this. The quality of the performance was so high, and today I got to watch it as a fan.”

To which J-Hope added: “Jimin was really helpful. When I was in the middle of the preparation process, it was a really dark world, but you became a spark of light for me.”

This year’s edition of Lollapalooza, which was streamed live on the Hulu platform, also featured the US festival debut of Tomorrow X Together, another South Korean boy band that is under the same label as BTS.

“These artists have been given great gifts in communication. Their global audience speak different languages but possess an intense passion for their music,” said Lollapalooza founder Perry Farrell in June.

“Lolla is the place where all music genres live in harmony.”

J-Hope’s main-stage performance comes more than a month after the seven members of BTS – one of the world’s most popular acts – said they were taking a break from the group to focus on solo pursuits.

In an emotional video clip posted to the septet’s official YouTube channel, they told fans they were “exhausted” and needed time apart.

At the time, J-Hope said the move could help BTS “become a stronger group.”

BTS is the first all-South Korean act to reign over Billboard’s US top singles chart, a milestone they achieved with Dynamite, the group’s first smash hit sung completely in English.

They are also one of few acts since The Beatles to release four albums that hit number one in the United States in less than two years.

The group has twice been nominated for a Grammy but has yet to win.

BTS made headlines earlier this year for visiting the White House to deliver a message on the fight against anti-Asian racism to President Joe Biden.