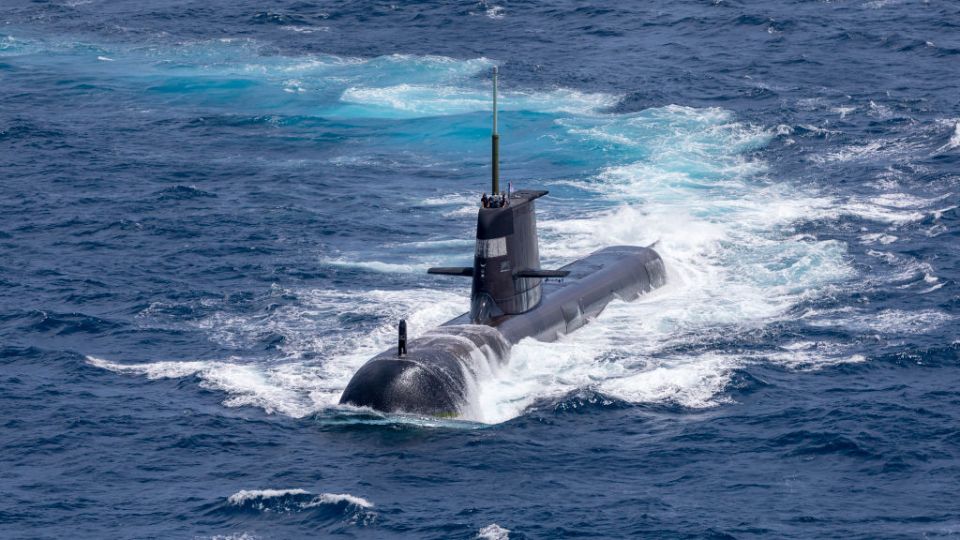 Washington and its allies have drawn fire and a backlash recently for their alarming, hasty pace of boosting military muscle and even a nuclear arms race in the Asia-Pacific region as they advance exclusive defense blocs such as AUKUS and QUAD.
Post Views: 99

Washington and its allies have drawn fire and a backlash recently for their alarming, hasty pace of boosting military muscle and even a nuclear arms race in the Asia-Pacific region as they advance exclusive defense blocs such as AUKUS and QUAD.

A number of leaders, scholars and observers warned that the US-led security blocs－mostly built in recent years－are risking the region’s hard-won peace and rapid economic growth built over the past decades when hyping the possibility of another Ukraine-style crisis in the Asia-Pacific region.

AUKUS, the trilateral security partnership established last September by the United States, the United Kingdom and Australia, will mark its anniversary next month amid widespread criticism for refusing to stop its plan to transfer nuclear-powered submarines to Australia.

Russian President Vladimir Putin blasted the US-led blocs and AUKUS in particular when addressing a Moscow security conference last week. He said that “the collective West is seeking to extend its bloc system to the Asia-Pacific region by analogy with NATO in Europe. For this purpose, aggressive military-political alliances are being formed, such as AUKUS and others.”

Indonesia voiced its objection to the AUKUS submarine deal in a document submitted to the Tenth Review Conference of the Parties to the Treaty on the Non-Proliferation of Nuclear Weapons, being held in New York from Aug 1 to 26.

“Indonesia views any cooperation involving the transfer of nuclear materials and technology for military purposes from nuclear-weapon states to any non-nuclear weapon states as increasing the associated risks (of) catastrophic humanitarian and environmental consequences,” the document said.

However, US Deputy Secretary of State Wendy Sherman talked about New Zealand’s potential membership of AUKUS during her visit to New Zealand earlier this month.

“We’ve always said that going forward as we look at other emerging technologies and what that may mean for everyone’s security in the world, that there may be scope for others to join so certainly if that time comes, New Zealand is a country with whom we would have conversation,” Radio New Zealand quoted Sherman as saying.

“Surprisingly, nuclear-free New Zealand may be inching toward becoming part of it,” Miller wrote in an article for The Diplomat magazine website.

Liu Chong, director of the Institute of International Security of the China Institutes of Contemporary International Relations, said such military blocs sought by Washington are “based on unequivocal adoption of double standards.”

“The chosen allies could develop or transfer weapons-level nuclear materials, while the US can arbitrarily impose sanctions upon other nations for the civil use of nuclear technology,” he said.

Another high-profile US-led bloc is QUAD, the Quadrilateral Security Dialogue, a strategic security dialogue between Australia, India, Japan, and the US.

Indian External Affairs Minister Subrahmanyam Jaishankar prompted criticism from both Beijing and Moscow when he claimed on Thursday that any reservations about the activities of the four-nation bloc were based on “unilateralist opposition to collective and cooperative endeavors”.

In response, Chinese Foreign Ministry spokesman Wang Wenbin said on Friday that, “In today’s world, building exclusive groups is against the trend of the times and will not get any support or get anywhere.”

“A bright future for the Asia-Pacific region lies in a political and security status quo that effectively responds to the reasonable concerns of various parties and ensures the equality of countries in the region. Yet we have seen the QUAD moving in the opposite direction, pushing the region toward divides, standoffs and bloc confrontation,” Yang warned.

Yang-Gyu Kim, principal researcher of the East Asia Institute, a South Korean think tank, noted that “high-ranking American officials use different terms to refer to US allies in the region”, such as “crown jewels”, “cornerstone” and “linchpin”.

“The invitation of South Korea, Japan, Australia and New Zealand to the Madrid NATO Summit and the adoption of the new NATO Strategic Concept defining China as a ‘systematic challenge’ are the culmination of Washington’s endeavors throughout this year to establish an extensive alliance network,” he said in an article published on Aug 18.

Feng Zhongping, director of the Chinese Academy of Social Sciences’ Institute of European Studies, noted that “Washington is pushing NATO to join forces with its smaller blocs in the Asia-Pacific in an attempt to fan up another major bloc confrontation in this region, serving its strategy to counter China”.

“The US-led military blocs such as the QUAD will add to global security risks and in return create an unfavorable situation for the US itself,” said Liu, the CICIR scholar.

In a recent interview with CNN Indonesia, Chinese Ambassador to Indonesia Lu Kang was asked about the difference between the Global Development Initiative and Global Security Initiative, and QUAD.

“First, they have different names: the former is about ‘global’, and the latter is about the four parties. The former means genuine multilateralism, they are open and inclusive; the latter is working on a small bloc, bloc politics and bloc confrontation,” Lu said.

Ren Lin, head of the Department of Global Governance at the Chinese Academy of Social Sciences’ Institute of World Economics and Politics, noted that “there are increasing military blocs, with growing momentum in the world”.

“It is increasingly difficult for countries to reach consensus and increase collaboration regarding global security governance at a time when confrontation is on the rise,” she said.

As the Ukraine crisis lingers, NATO is expanding its membership and is advancing the buildup of a variant of NATO in the Asia-Pacific region, Ren warned.

“The small cliques cannot resolve the big challenges in the security area, and they could even sabotage global efforts in reaching agreement over seeking global security,” she added.