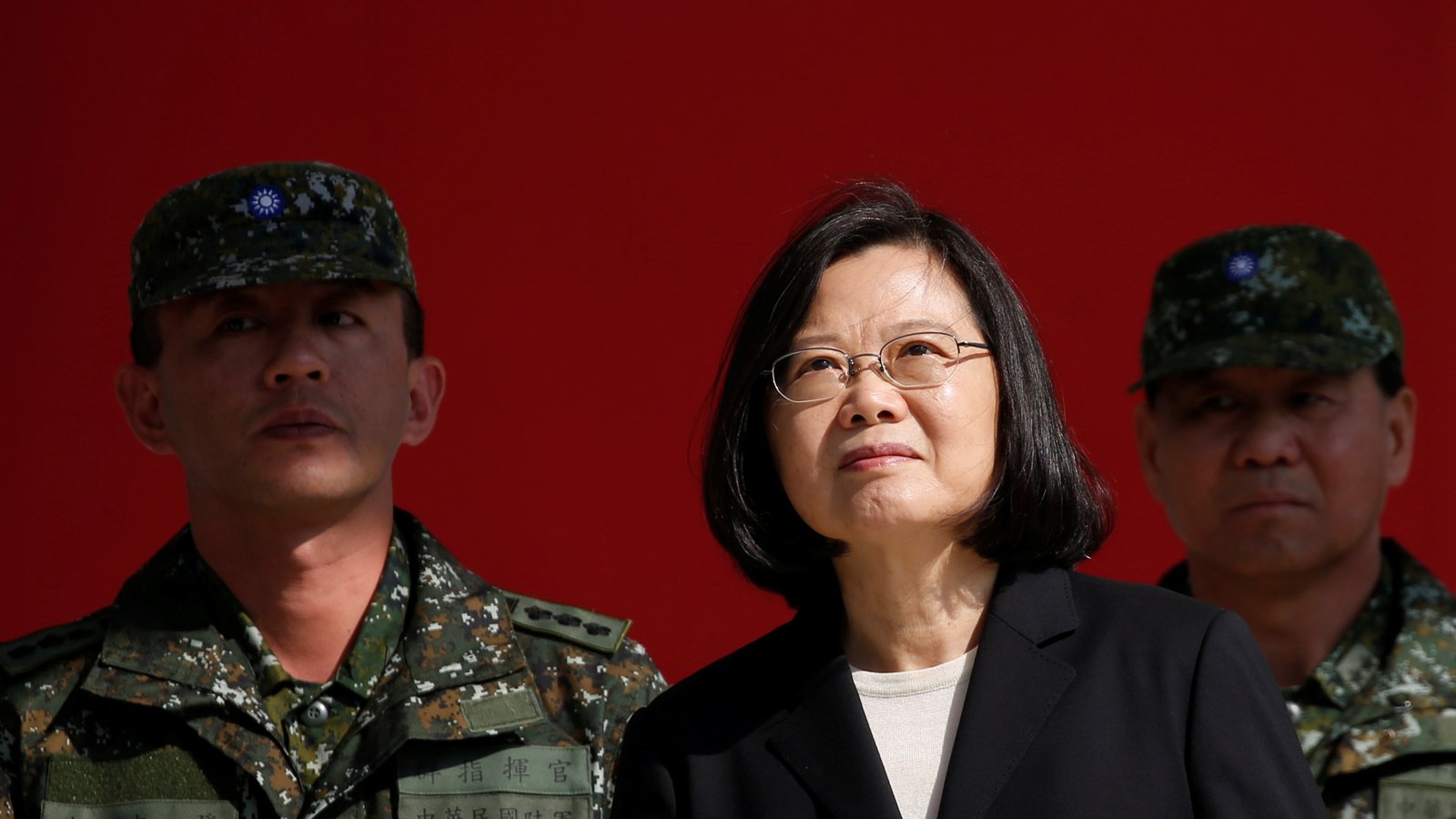 HONG KONG – Although the United States often expresses concerns over the possibility of Taiwan being reunified with its motherland by force, it claims to support consensual reunification. This, however, could not be further from the truth, and its own national interests dictate otherwise. It benefits enormously from cross-Straits divisions, and the last thing it wants to see is their removal.

While the US has no diplomatic relations with Taiwan, it promotes the island’s militarization by providing it, to the arms manufacturers’ delight, with huge quantities of weaponry. It justifies this by reference to the Taiwan Relations Act, enacted after Washington broke off diplomatic ties with Taipei in 1979, and which requires the US “to enable Taiwan to maintain sufficient defense capabilities”.

As the world’s top arms exporter, the US approved arms sales to Taiwan of around $1.4 billion in October 2021, including 135 precision-guided cruise missiles, as well as mobile light rocket launchers and air reconnaissance pods that can be attached to fighter jets. In September 2022, this was followed up with a $1.17 billion arms package for Taiwan, including anti-ship and air-to-air missiles. On Oct 19, 2022, moreover, Reuters reported that the US was considering joint weapons production with Taiwan, and, if the island were ever to be reunified, this lucrative arms market would be lost. This, of course, is the last thing its military-industrial complex, which views Taiwan as the gift that keeps on giving, wants to see.

Thus, on Sept 14, 2022, US senators Bob Menendez and Lindsey Graham co-sponsored the Taiwan Policy Act of 2022 in the US Senate Committee on Foreign Affairs, and the bill was warmly welcomed by Taipei. If enacted, it will require the departments of Defense and State, as well as defense manufacturers, to “prioritize and expedite” foreign military sales to Taipei. On Sept 15, 2022, moreover, US congressmen Steve Chabot and Brad Sherman introduced the Accelerating Arms Transfers to Taiwan Act, which, if passed, would make Taiwan eligible for priority delivery of excess defense articles. It would also require the secretary of defense, Lloyd Austin, to accelerate weapons procurement for Taiwan and authorize the creation of a war reserve stockpile on Taiwan.

Apart from supplying arms, the US has also been strengthening its official and military links with Taipei, authorizing the landing of its military aircraft on the island, and sailing its warships across the Taiwan Straits. On Oct 28, 2021, Taiwan’s leader, Tsai Ing-wen, confirmed for the first time that American troops were stationed on the island, ostensibly involved in training local forces. On May 31, 2022, when meeting visiting US Senator Tammy Duckworth, she further disclosed that the “US Department of Defense is now proactively planning cooperation between the US National Guard and Taiwan’s defense forces.”

Although these activities seemingly fly in the face of America’s stated one-China policy and play into the hands of the Taiwan separatists, there is method in its madness. On Nov 14, 2022, when US President Joe Biden met China’s president, Xi Jinping, in Bali, he assured him that “our one-China policy has not changed”, and that “we oppose unilateral change to the status quo by either side”. He did not, however, show his full hand, and his country is actually committed to ensuring that reunification, even if consensual, does not occur.

Although there are now influential figures in Washington, like former secretary of state Mike Pompeo, who advocate Taiwan becoming a sovereign state, Biden is not among them. He wants to maintain the island’s separate status, while not making any concessions to it on sovereignty. This involves emboldening the separatists, arming the island to the teeth, and promoting Taipei’s standing in the US. If the US, while maintaining diplomatic, trading and other ties with Beijing, can continue to call the shots in Taipei and take advantage of all the island has to offer, it will, Biden reasons, have got the best of both worlds, even if Taiwan remains a global pariah.

Indeed, the US has cogent reasons of its own for resisting Taiwan’s reunification, although it always claims its weaponization of the island is motivated by the need to protect its democracy and way of life.

When, for example, the US secretary of state, Antony Blinken, addressed George Washington University on May 26, 2022, he described Taiwan as “a vibrant democracy”, having “many shared interests and values” with America. On Aug 3, 2022, when the US House speaker, Nancy Pelosi, visited Taipei, she portrayed US support for Taiwan in terms of “upholding democracy and human rights”. On Sept 24, 2022, the US vice-president, Kamala Harris, while visiting Japan, declared that Taiwan was “a vibrant democracy”, and that the US would continue “to deepen our unofficial ties” (meaning it will tighten its grip on the island’s affairs).

Nobody, however, should be fooled by this sanctimonious pontificating about Taiwan’s democracy, as it is a smokescreen, and the US is actually motivated by three key interests of its own.

First and foremost, Taiwan benefits the US economy enormously, and not only in terms of arms sales. Although the US is now investing heavily at home in technology in the hope of catching up, this will take time, and most of its semiconductors are still produced in Taiwan. As semiconductors form the microchips that power the bulk of electronic devices, any change in Taiwan’s status would seriously disrupt America’s supply chains. As Ian Easton, a research fellow at the Project 2049 Institute, has explained, “If we were to lose Taiwan, it would devastate our economy.” What this means, therefore, is that everything possible must be done to prevent reunification, at least for the foreseeable future, if not forever.

Before China resumed the exercise of sovereignty over Hong Kong in 1997, the city was an immensely useful spying center for the West. It was even known as “the Casablanca of the East”, given that it housed so many foreign spies. The British secret intelligence service (MI6) oversaw things, and it worked hand in glove with its American counterparts (including the CIA), with the latest technology being used to monitor developments on the Chinese mainland. Although foreign spying activity has continued after 1997, it has been scaled back, particularly after the enactment of the National Security Law for Hong Kong in 2020, and the US has transferred some of its espionage operations from Hong Kong to Taiwan, where its client government grants it free rein.

In Taiwan, the US has, for example, installed a whole host of listening posts and early-warning radars, underpinned by state-of-the-art spy technology. Although precise information is hard to come by, the Taipei Times, on Jan 18, 2003, reported that the US had created a “signals intelligence (SIGINT) facility” in Yangmingshan, a Taipei suburb, and that this was done as part of “a highly secret security cooperation program”. Given the island’s strategic location, the US spy agencies are able to monitor all types of activities on the Chinese mainland, including those of the People’s Liberation Army.

The Taipei government is more than willing to share its own intelligence with Washington, and this it has in abundance. On Sept 24, 2014, the Taipei Times reported that the Project 2049 Institute had quoted unnamed intelligence sources as saying that Taiwan’s spying operations against the mainland “are the most effective in the world”. As an espionage bridgehead, therefore, Taiwan is invaluable for the US, and this is the second major reason why it cannot countenance cross-Straits reunification.

The third reason is wider, having more to do with Taiwan’s strategic position in the “first island chain”. As the largest land mass between Japan and the Philippines, US strategists view Taiwan Island as a geographical pivot that links a chain of islands they consider vital to preventing China from becoming the dominant Pacific power. If Beijing controlled Taiwan, it could signal an end to US military dominance in the region, and this is yet another potent factor in Biden’s support of the status quo. As Ian Easton has explained, “If Taiwan were to fall, it would devastate our military and security situation.”

It is clear, therefore, that Taiwan’s internal democratic processes are not the policy influencers the likes of Blinken, Pelosi and Harris claim them to be. Although zealots like Pompeo want to decouple the US from China altogether, Biden’s strategy is to have his cake and eat it. On the one hand, he is committed to upholding the one-China policy, thereby placating Beijing, while, on the other, ensuring that Taiwan is not, for whatever reason, reunified with its motherland.

The central issue, therefore, involves American self-interest, and not what is best for Taiwan. The US has played everybody for suckers, and its reasons for opposing cross-Straits unity can be readily ascertained. If, however, it thought a house divided would prevent China’s resurgence, it is gravely mistaken, and it is proceeding apace. At some point, its proxies in Taipei will hopefully wake up, and realize they are being cynically manipulated by people who do not have Taiwan’s long-term interests at heart.