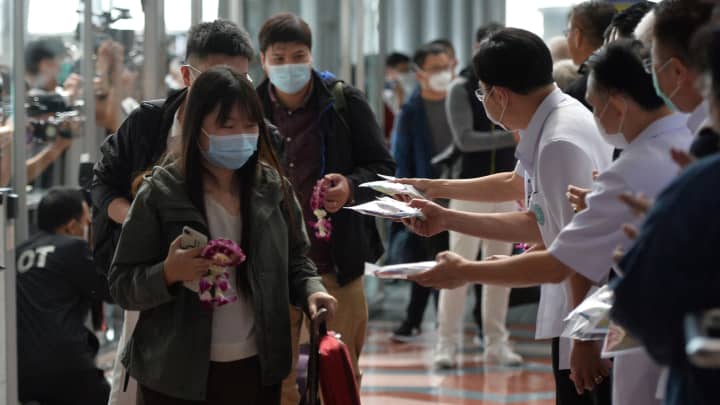 Travel restrictions launched in the wake of China’s border reopening may be affecting where people there are booking trips.

But it’s not out of spite, said several Chinese travelers who spoke to CNBC.

It’s because some countries aren’t letting them in easily, they said.

Reactions from Chinese travelers who spoke to CNBC were varied, ranging from indifference to confusion to anger.

“Of course, I think it’s unfair,” said one citizen, who asked to be called Bonnie. “But at the same time, we understand what’s going on.”

So far, more than a dozen countries have announced new rules for travelers departing from China. Last week, the European Union recommended that its members require Chinese travelers to take Covid tests before entering.

But Covid tests aren’t the problem, Shaun Rein, managing director of China Market Research Group, told “Squawk Box Asia” on Monday. It’s that “these policies are directed only towards mainland Chinese,” he said.

South African Mansoor Mohamed, who lives in China, agreed. “It is relatively easy and cheap to do a Covid test in China, so it will not affect my travel planning,” he said.

″However, I know that many patriotic Chinese colleagues and friends will avoid those countries for now because the practice of only testing passengers arriving from China is discriminatory,” he said.

Of course, China requires travelers to test negative before entering China, and has for three years.

The difference, Mohamed said, is that “every arrival [to China], including Chinese nationals … [is] subjected to the same rules.”

Where the Chinese are going

Gao Dan told CNBC she is planning to travel out of the province of Qinghai for the first time in more than two years. But she said she’s staying in China, adding that she “hasn’t looked into what other countries’ travel policies are,” according to a CNBC translation.

Others are booking trips abroad, but some not to their first-choice destinations — namely Japan and South Korea.

One traveler, named Bonnie, told CNBC her friends in China are going to Thailand rather than South Korea, even though “they wouldn’t have considered Thailand” before.

“When China said they were opening the borders in January, all my friends said they’re going to Japan and Korea,” said Bonnie.

But they couldn’t get visas, she said. “So they are now going to Thailand.”

Rein said Chinese travelers are now headed to Singapore and Thailand because “both countries are welcoming us.”

Of the top destinations Chinese nationals searched after the border reopening announcement, those are the only two that haven’t imposed new restrictions on incoming Chinese travelers.

Data shows search interest for outbound flights from mainland China rose by 83% in the 11 days after the announcement, compared with the 14 days before it, according to data from Trip.com Group.

During this period, search interest for Thailand and Singapore grew by 176% and 93%, respectively, according to the company.

Angrier at some more than others

China’s reopening announcement surprised many by coming as Covid-19 infections soared in the country.

Hospital beds were reported to be nearing capacity in late December, though the full scale of the outbreak is unclear because Beijing isn’t reporting daily Covid fatalities and narrowed the official definition of what counts as a Covid death. Those moves and a general lack of transparency have raised doubts about the accuracy of China’s official Covid statistics.

Still, Chinese travelers are “very angry” at South Korea — and “even angrier” at Japan — over travel rules that they believe single them out, said Rein.

Both countries announced they will not increase flights from China and will limit where flights can land. Visitors from China must take pre- and post-departure Covid PCR tests too.

Chinese officials called the rules from South Korea and others “excessive” and “discriminatory.”

But South Korea refutes claims of discrimination. Seung-ho Choi, a deputy director at the Korea Disease Control and Prevention Agency, pointed out to CNBC that the country’s rules apply to “Korean nationals and non-Korean nationals coming from China. … There is no discrimination for nationality in this measure.”

“China’s Covid situation is still worsening,” he said. The number of people traveling from China to Korea who tested positive for Covid-19 went up 14 times from November to December, he said.

The Prime Minister’s Office of Japan did not respond to CNBC’s request for comment. A representative at Japan’s Embassy in Singapore told CNBC that Japan is processing Chinese travel visa requests as usual.

Citing a discrepancy in infection information from China, Japan Prime Minister Fumio Kishida told reporters on Dec. 27: “In order to avoid a sharp increase in the influx of new cases into the country, we are focusing efforts on entry inspections and airports,” according to an article published by Nikkei Asia.

Both Japan and South Korea have taken conservative stances toward the Covid pandemic.

Japan, in particular, has been sluggish to bounce back to pre-pandemic life, with residents showing little enthusiasm when its own border fully reopened in October 2022.

Rein told “Squawk Box Asia” that the rules are not just about tourism.

“This is a political issue,” he said, adding that he expects Japanese stocks to be affected, singling out two cosmetics names.

“I would be cautious on Shiseido. I’d be cautious on Kose, because there are going to be some boycotts,” he said. Shares of Kose were lower on the Tokyo stock exchange on Tuesday, but Shiseido was higher.

Rein said animosity toward South Korea and Japan will be short-lived.

“It’ll take about three months for the anger to dissipate,” he said. “There’s going to be massive revenge travel outside to Korea to Japan — if those two countries treat Chinese properly.”

New Zealander Darren Straker, who lives and works in Shanghai, said he, too, believes the policies are politically motivated, calling them a “last sad gasp [as] the Covid geopolitical door closes.”